The RTA insists on the use of solar power for school zone flashing lights. To quote the Roads Minister from Hansard: "In general, solar powered is the preferred option and the RTA only uses mains power where solar power options are not viable."

Here are a few facts about solar power vs mains power in this application that illustrate why the RTA has once again got it completely wrong: 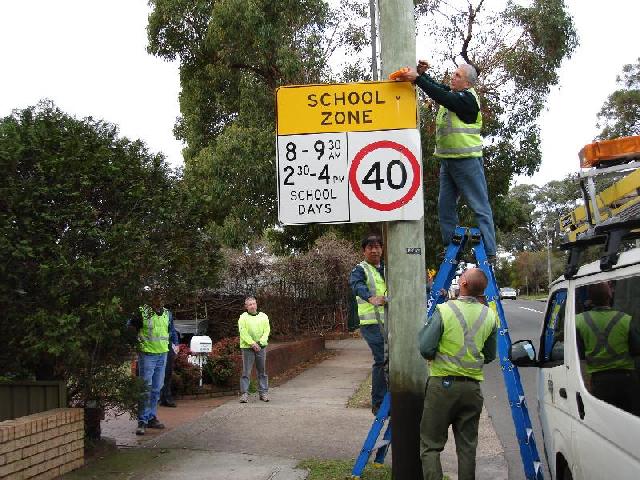 How many RTA workers does it take to change a light bulb...?

Below is an interesting article on the cost of solar power that I found on the web somewhere:

"Solar Desert" is a simple idea: Cover the world's deserts with solar panels.

A group of companies is planning a 3,200 acre, 300MW solar farm in the New Mexico desert. 3,200 acres of solar to generate 300MW boils down to about 11 acres per MW. For Southern US we get the equivalent of about 6 hours of full sunshine every day due to seasonal sun angle and darkness. Central Australia gets about 5.5 - go figure. So, 6/24 being about ¼ of a day the average output needed is about 44 acres/MW to make up for dark periods if we want 24 hr operation. This way we generate 4x the amount of power we need while the sun is out and rely on batteries for remaining ¾ of the day when it is dark or at twilight. If we assume that charging and discharging batteries is about 80% efficient then we need about 55 acres for every MW we want to be supplied over 24 hours. So if we have 55 acres of solar we can generate an average of 1 MW/hr daily.

Now since a solar plant only works during daylight we will need batteries to be able to supply balanced power over a 24hr period. To supply battery power for 24 hours means we need a rack of batteries. Assuming 12v 104Ah (24hr) batteries we will need about 75 million batteries according to a handy dandy battery calculator I found on the net. If each battery, its housing, inverter, cables and access path takes up 3 square feet then we need about 225 million square feet of space for our batteries. That would be a square almost 3 miles on a side, or about 2,500 Wal-mart Super Centers.

Of course batteries only last 5 years so we would be replacing 15 million batteries a year or about 1 million per month. If we continue with this and assume each battery weights say 20 pounds and half of that is lead and half is acid then we are disposing 500,000 pounds of lead and 500,000 pounds of acid a month.

The 300MW plant listed at the beginning of this article is priced at $1.5B. Now we are going to build a 15,000,000,000watt plant (to get the equivalent of 3,000MW/hr/day in only 6 hr of full daylight) and using that as our yardstick we can guess our plant would cost about $50B. By comparison it costs about $6B to build a nuke and about $300M to decommission. So we could build and decommission 8 nuclear plants for the same price it would cost us to build one solar plant. Are we having fun yet?"